Update on NSW Government funding for all 3-year-olds ... but not "ALL" 3-year-olds

To much fanfare from the early childhood education and care sector, the announcement by the NSW Treasurer, the Hon Dominic Perrottet MP, on 19 June 2018 that "from 2019, in an Australian first, every three-year-old in New South Wales will now have access to subsidised early learning. That's part of an almost $200 million investment in our children, saving families on average $825 per year." 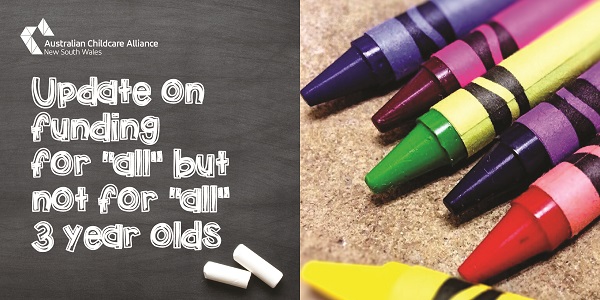 Even the outgoing Executive Director of the NSW Department of Education's Early Childhood Education Directorate said in EC Extra (September 2019), "Start Strong has been the department's signature policy change during this period and I am extremely proud to have led our teams in delivering increased access to 600 hours of preschool education for children in the year before school, and to have been the first state to introduce funding support for all three year olds from 2019."

According to information provided by the NSW Department of Education, the Australian Childcare Alliance (ACA) NSW can advise that:

4,596 children is a significantly lower number than the 100,079 children who are 3-year-olds in New South Wales (ie 4.6%). Moreover, even if the NSW Government and the NSW Department only meant the funding to be for community preschools, then in theory that should be for 21,699 children.

Ironically, the 2012 Review of NSW Government Funding for Early Childhood Education, the 2016 NSW Auditor General’s Report on Early Childhood Education and the 2017 Lifting Our Game Report all recommended that NSW government funding for preschool should be available to all children in all settings including long daycare and not just in community preschool. This is demonstrated in other states like Victoria and Queensland.

ACA NSW has sought clarification from the NSW Government on what it meant by "every three-year-old in New South Wales" and "all three year olds".