Can services get the same training as NSW assessors for A&Rs?

The Australian Childcare Alliance (ACA) NSW has formally requested to the NSW Minister for Education and Early Childhood Learning, the Hon Sarah Mitchell MLC, that NSW-based services be allowed to get the same training about Assessments and Ratings as her NSW Department's assessors. 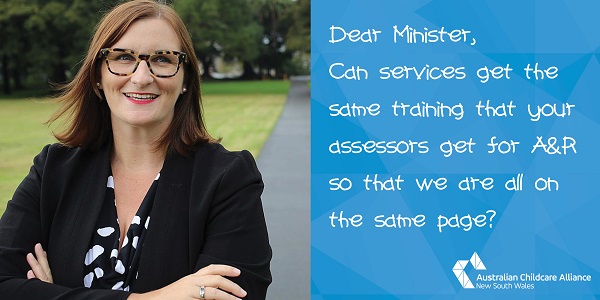 ACA NSW has noticed that there are inconsistencies in how the NSW Department of Education's assessors apply the “streamlined” NQF since February 2018, and arguably a disconnection of understanding by a large number of services based on the following observations of services that were re-rated from 1 February 2018 to 31 January 2019:

ACA NSW is most concerned that NSW service providers’ overall performance from 1 February 2018 to 31 January 2019 appears to be poorer than any other Australian jurisdiction.

As such, ACA NSW is asking that service providers be allowed to have the same training as the NSW Department’s assessors conducted by ACECQA. This way, both assessors and services can be on the same page and services’ understanding of assessors’ requirements and expectations would be at its potential optimum.