The Australian Childcare Alliance (ACA) NSW members would know that ACA NSW and through the ACA National Committee have been advocating for a national standardised starting age for school to the NSW Government as well as the Federal Government and the respective parliaments. 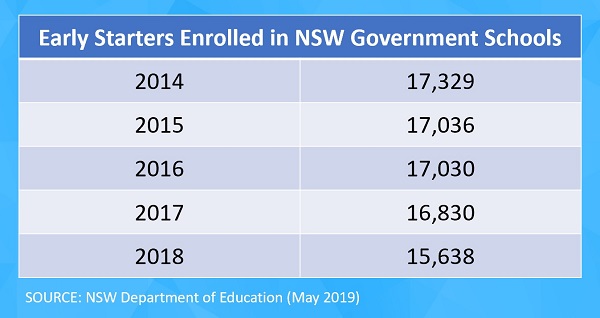 It might interest ACA NSW members to know that in NSW, the number of early starters enrolled in NSW Government Schools have been steadily dropping for the last 5 years since 2014.

This could mean that more parents are heeding our collective messages that a number of parents, whose children had negative experiences as one of the youngest in their class, or positive experiences being one of the oldest, felt justified in delaying kindergarten entry. They wanted their child to have more maturity and be one of the oldest in the class, indicating this would help them deal with issues including peer pressure, drinking and remaining focused on studying.

The data sourced from the NSW Department of Education, unfortunately, does not take into consideration the number of children enrolled in non-government schools. However, New South Wales had the proportion of parents holding children back is as high as 22 per cent, with the primary reason being the cut-off in NSW being 31 July was the latest in the country.