The Australian Childcare Alliance (ACA) NSW has responded in disillusionment following the announcement by the NSW Coalition Government of a new star rating system to be imposed in 2020 on over 5,500 New South Wales-based early childhood education and care services. 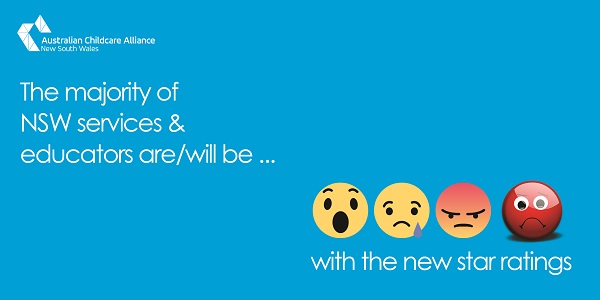 ACA NSW was not invited to be part of any consultation for this new star rating proposal. And had we been invited, we would have advised the NSW Government and the NSW Department of Education that this would not work. The reason being the existing underlying systemic issues cause too many confused yet satisfied parents to question why their services were given the ratings they were given by the NSW Department of Education.

(NOTE: The first 12 months when National Quality Standards (NQS) was “streamlined” yet 57.1% of those re-assessed NSW-based services who were previously rated Exceeding were downgraded to the lower Meeting and Working Towards the NQS ratings. It is also worth knowing that since 2012, the National Law and National Regulations require every early childhood education and care service provider to publicly present the service’s quality ratings for the benefit of existing and prospective parents. And the NSW Government can also impose penalties of up to $2,000 if approved providers falsely represent their ratings.)

The proposed new star rating by the NSW Government is intended to replace the words-based rating with one-to-four different coloured stars – a red star for services rated Significant Improvement Required, a yellow star for Working Towards, a green star for Meeting and a blue star for Exceeding. There is insufficient information about the fifth star.

If this new star system is superior to the current requirement in highlighting underperforming childcare centres, why does NSW appear to be going alone with this new system, especially when NSW’s ratings are consistently below the national averages for Excellent, Exceeding and Meeting, and sadly higher than we should be on Working Towards and Significant Improvement Required.

During 2018 and 2019, ACA NSW has participated in the majority of four industry sector consultations (known as the NSW Department of Education’s roadshows) where it and others had consistently and overtly raised its concerns about the inconsistencies and subjectiveness of NSW’s assessment and ratings process.

If service providers and educators do not have faith in the current assessment and rating system, how can parents have faith in the new star rating in NSW? Instead, it will only serve to further disenfranchise the very people the NSW Government needs to implement its public policy, leaving parents none the wiser as to why their services are rated the way they are.

ACA NSW will reiterate its concerns and present again its 1,600 member services’ suggested solutions to the NSW Minister for Education and Early Childhood Learning, the Hon Sarah Mitchell MLC, and the NSW Department of Education, for their re-consideration.